tHE bOOKs OF LEGENDS AND REALITIES,

Holger the Dane dreamt that all Danes were safe. This night was different. He dreamt of RAGNAROK. The end of all world’s and the universe itself. A threat to the Danes and all living beings on the planet earth.

“RAGNAROK is a battle that cannot be fought with weapons of steel.It can only be fought with the weapons of the mind.Instruments and creations of beauty are the weapons that make happy moments and dreams.Dreams that reverse the self-destructive behavior of Man and Gods.Dreams of happiness and a bright future in a world of wonders, beauty and peace.It is an ancient force that existed before the Universe, that is the cause of RAGNAROK. It poisons minds with jealousy, greed, fear and false dreams.When minds stop dreaming true dreams,the lights of hope die and Gods and mankind turn to destructive behavior that threatens the existence of all worlds and the Universe itself. Smiles and laughter are makers of true dreams. Dreams that will fight the dark and restore the light of hope and happiness.THAT, my friend, is the ultimate battle of all.”

THE LEGEND OF HOLGER THE DANE 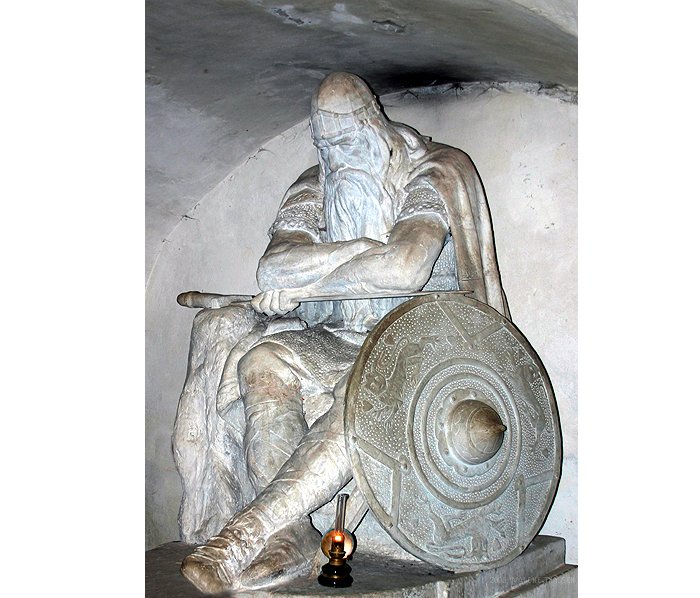 Holger Danske, also called Holger or Ogier the Dane was a fearsome Viking warrior. His entire life, from birth to death is shrouded in mystery. According to ancient legends Holger Danske never died. Instead he sleeps in the dark cellar of Kronborg Castle at Elsinore, the setting of Shakespeare’s Hamlet.

The legend says that every Christmas Eve an Angel of God comes and assures him that what he has dreamed is true, and that he can safely go back to sleep, because Denmark is in no real danger. But if danger ever does come, then old Holger Danske will arise, breaking the table in pieces as he pulls out his beard! And then he will come forward and strike out and be heard in all the lands of the Earth.

In the only reality that the minds of human beings have the ability to sense, a human being has a body and a mind. The Vikings referred to this world as “Midgaard”, the known and inhabited world. In Midgaard, Holger the Dane has been sculptured in concrete and for minds that do not believe in other worlds or realities, nor in magic or miracles, Holger the Dane is just a concrete figure that can never come alive.
But for children and people in Midgaard who possess a free mind and believe in legends, miracles and magic, Holger the Dane is alive. He lives in the worlds and realities they visit in dreams, where he appears as the tall, strong and fearsome warrior he is sculptured as in Midgaard.
All Danes have been visited by Holger the Dane in their dreams. Mostly he stays hidden and do not talk nor act. He listens and observes, always alert if he finds signs, that the Danes in Midgaard are at real danger.
During World War II, Holger Danske sensed a real danger, threatening the Danes in Midgaard. Through appearing in dreams of courageous Danish warriors, he united their minds and they formed “Holger Danske Resistance”, a resistance group that operated coordinated, yet individual.
The resistance group was indeed Holger Danske who had come alive in the world of Midgaard. Not as one warrior, but as a unity of many minds that formed a fearsome “Body” as a group of courageous men and women. Back then, Holger Danske became a hero. Together with many allied, “he” (the Holger Danske group) defeated the danger that threatened the world and the Danes. The occupying German forces surrendered on 5th May 1945.
In 2015, Holger Danske once again became alert of a great danger. A danger threatening the world and the Danes. A great danger that had gone unseen, like an invisible ghost. But in 2015, he saw a glimpse of the face of this ghost in a dream of a young boy.
In the boy’s dream, the face was first of of a kind looking man standing on the safe side of a dilapidated bridge across a deep dark canyon. The man had sent across ropes and reinforcements for the bridge to help the family to safely cross the canyon. They did cross safely, but as soon as the father reached out his hand to thank the man, the man’s face turned grim and with a develish laughter, he had grabbed the chest with all their belongings and then pushed them over the edge. In the boy’s dream, they all landed on a rocky ledge three or four meters down from where the man was standing. The dream had then changed into the garden of the boy and his family. The mans friendly face was now placed at the top of a tall tree. In the boy’s dream, the boy and his dad were axing the tree to fall with anger and tears in their eyes, while yelling “You devil, stop hurting our family”. When the tree fell, the face had again turned into a devilish looking demon, but instead of falling to the ground with the three, it flew into the dark clouds, leaving behind only devilish scaring laughter clinging in the mind of the young boy. A laughter he could hear not only in his dreams, but also when he was awake.
It was this boy’s dreams and this evil laughter, that had alerted Holger the Dane, and when he later wandered into the dreams of the father, the grandfather and others in their family, he realized that a great danger had come to threaten, not only this boy’s family, but all Danes. But Holger the Dane was, at that time, still unaware that it was one of the many faces of RAGNAROK he had seen in the young boy’s dream.

tHE bOOKs OF LEGENDS AND REALITIES,

These were the first three chapters in the first short edition of a fiction and reality book. This book is being written as events happens in real life.
Much events will happen from Holger the Dane awakes in Chapter 3 and until the first Viking Tour in April 2020.
In brief, Holger the Dane several times finds himself in dreams that are neither his own, nor of any being in Midgaard. The RAGNAROK dream in chapter one, was the first of these dreams. In time, he receive wisdom in these dreams, that he assume can only come from  “Mimir”, a once exceptional wise being and counselor of Gods. That was until he was killed and beheaded by “The Vanir”. However, Odin embalmed Mimir’s head with special herbs and chanted magical songs over it to preserve it.
In the dreams, he assume is of Mimir, Holger the Dane realize, that he has to send a Viking ancestor on a mission in a world that he knows not where are, yet he knows the seas from dreams of Vikings that once went there, but never returned.
The April 2020 Viking Tour takes place more than three years (and several chapters) after the Viking ancestor had visited more than one continent on THE RAGNAROK MISSION, to find allied for the ultimate battle in all corners of the world.
Top
Translate »